It’s time for me to come clean. After last week’s native plants manifesto, I realized I’m a giant hypocrite because I plant an entire garden of non-native annuals every single year. Yep, that would be my vegetable gardens. And I’m not giving them up. So, now that my confession is over and you’ve forgiven me (right?), let’s talk about something positive: the harvest.

We have more Long Island Cheese pumpkins than we know what to do with. My decision to grow them this year (at our community garden plot) was 100% fueled by this post and accompanying recipe. We made the soup last night and it was good. Subtle, but good. Once cured, these pumpkins do have a pretty great flavor. I’ll bake them up one at a time (because I can literally only fit one at a time in my oven) and freeze the flesh for pies, breads, pancakes, etc.  I’ve also given a few away to friends and family. So fun to have a big success!

No year is complete without a few fails: my Romanesco Broccolli still has not formed heads and I don’t see how it will now, since the sun has now dipped behind my neighbor’s roofline for most of the day. I also crowded too many plants in this little space. The broccoli and cauliflower really shaded the purple kohlrabi. There are one or two edible kohlrabis in there, but the rest are mostly greens. I’ll still cook them up—all are edible. I think we ran out of the large amounts of sunlight the Romanescos need, just at the time they need them. This particular spot is truly a short-season garden. 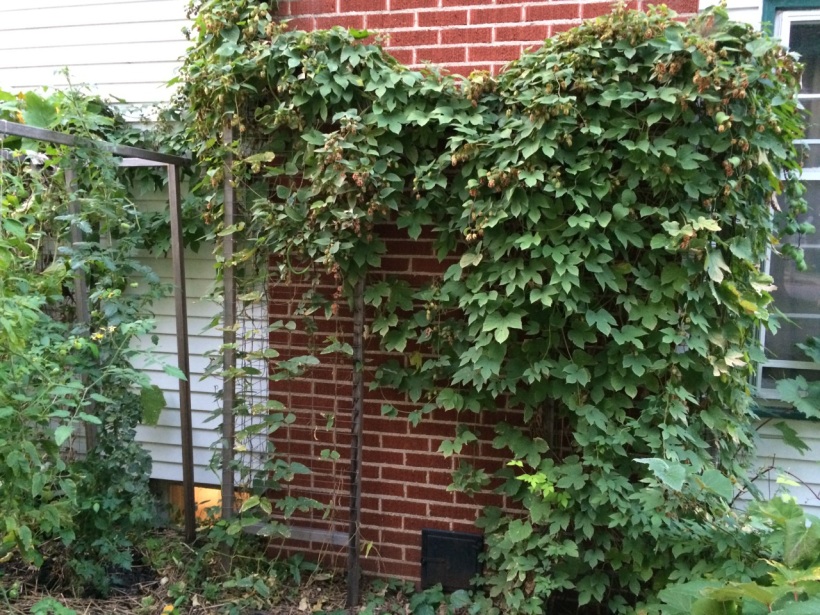 Speaking of fails, here’s another one that only recently came to light.  We started talking to a fellow home-brewer at National Night Out, and realized that we are not growing the right kind of hops (he informed us with his nose in the air). We have Golden Hops; apparently they’re not really recommended for brewing. No wonder the homebrew we made with them last year didn’t taste quite right! We were planning on removing this vine anyway next year. It has gotten too big for this little garden spot, and we might just let it die and replace it with Cascade, or another traditional brewing hops plant. Even Master Gardeners can make big mistakes! 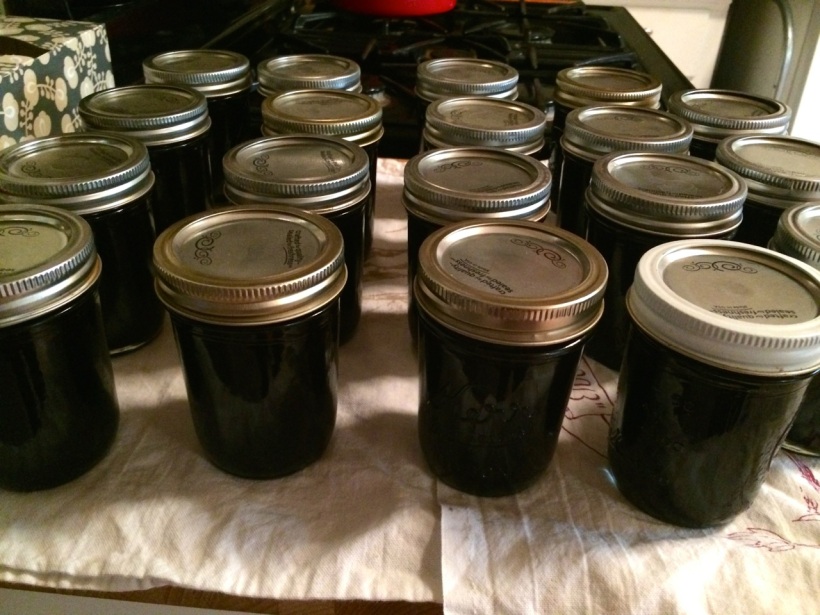 Enough of the fails, in a year where we have SO MUCH for which to be thankful. One of those things was the opportunity for me to take a Friday off work in August so that the family could go pick blueberries in eastern Wisconsin. We made quite a few (18?) half-pints of this simply amazing blueberry preserves recipe, and have been enjoying it weekly since.

I never grow enough tomatoes for canning, so as usual I purchased 40 lbs of canning tomatoes from Gardens of Eagan—the best value I’ve been able to find at $1/lb. I had grand plans, and my best friend and I thought we could drink wine and can tomatoes at the same time. You can imagine how much we actually got done!  We processed 1/3 of them raw, while another 1/3 of them baked in the oven using Trout Caviar‘s roasted tomato recipe. We intended to can the roasted tomatoes in these half pints (we use them as a pizza sauce base), but ended up freezing them because my patience for the canning process is wearing thin, in general.

Later that week I still had 1/3 of the tomatoes to use up, so Adam and I tried our hands at tomato paste, using this recipe. It was easy! I’ll definitely do that again. We froze the resulting paste in ice cube trays and I have a feeling it will be gone before the new year. 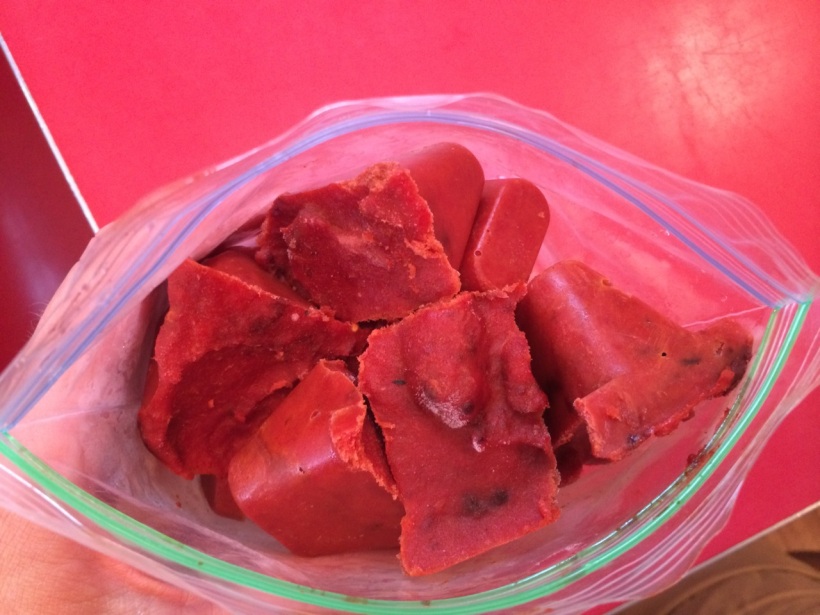 Frozen cubes of tomato paste, ready to be used.

We dug up three final hills of “La Ratte” fingerling potatoes the first weekend of September, from our community garden plot. They seem to be storing pretty well so far, but we’ll use them up before we really test how long they can last. 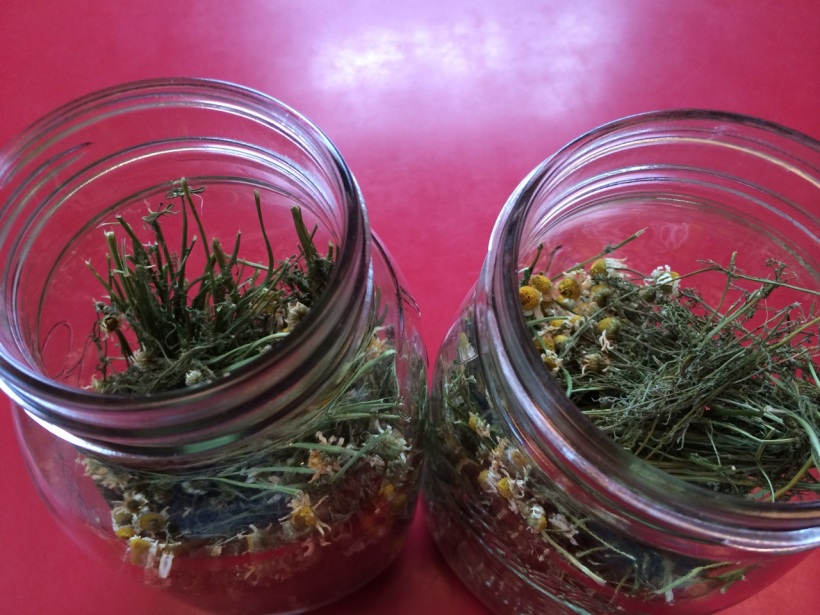 I didn’t dry quite as much mint as I usually do, but I doubled my usual amount of dried chamomile flowers for tea this winter. Good thing too; we’ve already run through one minor illness in the first month of school.

Over in the prairie boulevard, Little Bluestem is turning absolutely gorgeous.

In the backyard woodland garden, this wee little aromatic aster (mixed in with some lemon balm) is adding a nice little splash of color.

We have two remaining harvests in our community garden plot, too: our brussels sprouts and Anneke’s strawberry popcorn, which is close to being ready. Part of me wishes we would have a freeze to sweeten up those brussels. We’re living on borrowed time right now here in the Twin Cities; the average first frost date is September 21.

I hope this post has illustrated that every year in the garden, you have some successes and some failures. This blog is part of how I keep track of mine. It’s all part of the process, right?!

One thought on “Harvest time”

So many flowers, it’s just ridiculous out there. 💜🤍💛
My sour cherry tree is buzzing today. Does it feel like we fast forwarded through spring? Good grief. Bees are so fascinating though—contrast the size of the bumblebee in the first pic with the smaller bee in the next. I’m so happy they’re back. #pollinators #nofilter #nokomislife #springinmn
Tulip time! It’s a miracle that any of these survived the various onslaughts the squirrels have brought. #nokomislife
I’ve been thinking about strawberries today. This morning I was stress weeding and I ended up digging nearly all of them up in order to properly rid the area of creeping bellflower, my arch nemesis. The process really wasn’t terribly hard and as a result I think I’ll start doing this ever year: dig up all the strawberry plants, thoroughly weed, amend soil, replant. Why didn’t I think of that before? I bet others are already doing this. Care to weigh in? Care to commiserate about creeping bellflower?