It’s January. It’s about zero degrees F. A snowstorm is due any minute. Time to get started on planning my garden for this year.

The main thing to note about this year’s plan: it does not include cucumbers or tomatoes. I’m giving my main home garden the year off from both; I’ll most likely try to grow them at Sabathani Community Garden. My home garden has built up various tomato and cucumber diseases over the past few years, and I need a year of starving both bacteria in hopes of getting rid of them for good.

Let’s take a look at the plan: 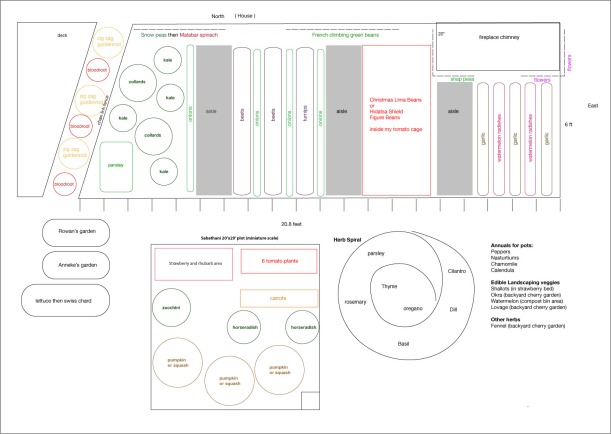 Starting on the far left, the little strip of land between my deck and chain link fence was a fine rhubarb area for several years, but unfortunately the grapevines that I am training on the arbor over the deck are now casting deep shade in that area for most of the summer—this is what I wanted! But it means the rhubarb had to go somewhere sunnier. I transplanted it last fall.

In its spot I will put a mix of early- and late-season pollinator support plants. My two favorites for a shady spot like this are bloodroot and zig zag goldenrod. 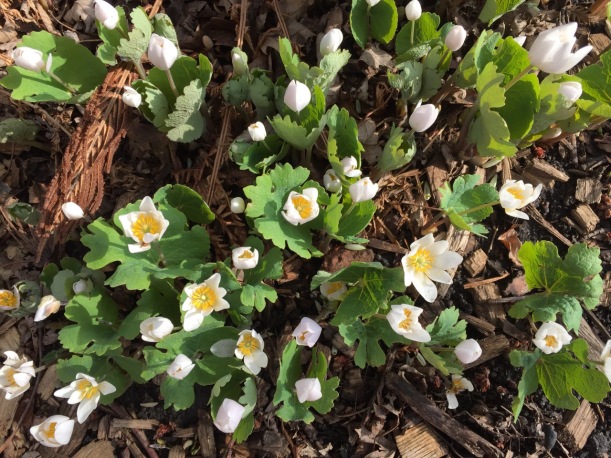 Bloodroot blooms in the very early spring—usually in April when I’m feeling the most desperate for some sign of spring. It’s an ephemeral so it only blooms for a very short time, then the leaves get quite large and look just like an umbrella for a fairy to sit under. I can’t get enough of these plants. They also spread gradually, so I’ve been dividing them every couple years and adding them all over the yard. Prairie Moon is a good source for Bloodroot, if you don’t know anyone with some to divide. 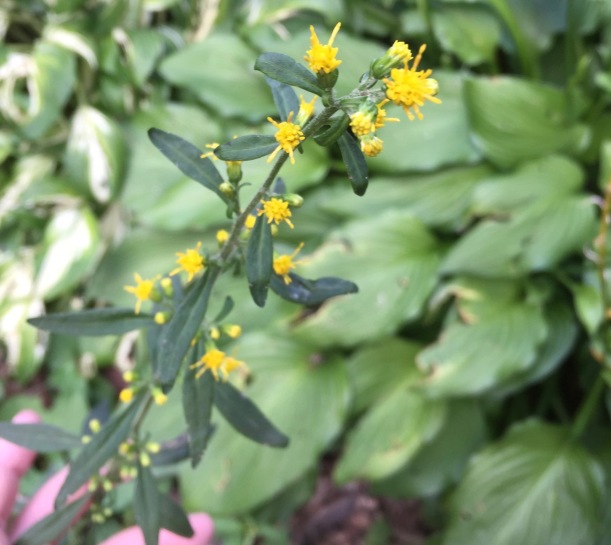 Then there’s zig zag goldenrod, the only goldenrod to thrive in shade. It blooms at the very opposite end of the season, August-October. I’m slowly adding this to all shady areas of my yard. I’ve always had plenty of blooms from June-August, but have been a little lacking in the very beginning and end of the season. Time to work on that.

Getting back to the garden plan, the first bed on the far left has greens in it, and I think this is about all I’ll be able to grow in this spot anymore. The arbor is shading this area of the garden for a significant portion of the day now, too. I had my tomatoes in that spot last year and they performed dismally—lots of green foliage but hardly any tomatoes, a classic sign of insufficient light.

Next we have some turnips, onions, and beets, in the spot where I grew leeks and onions last year. After this year I will have to let this spot rest from members of the allium family or I’m going to create a problem.

Next is the spot where I’ll put my tomato cage, except this year I’m growing heirloom dried beans in it. Legumes for the win! I plan to leave the cage in this spot permanently—we discovered this spring that moving it is a major pain. So I’ll rotate legumes and tomatoes in and out of it each year, relying on pots and/or my community garden plot in the years I don’t put tomatoes in this garden.

Finally we have the spot where I planted some garlic last fall. If it survives the insane sub-zero temperatures that are arriving shortly, it will be so fun to have garlic again. I haven’t grown it in a few years. I’m going to try following it up with some watermelon radishes; they are better when grown in the later season.

So that’s my plan, in a nutshell. I’ll also do various pots and edible landscaping tricks. I have a very large new sunny area in the backyard now that is raising all kinds of possibilities. Eventually it will be a mini tallgrass prairie, but for now… maybe we could grow some watermelons…

I went to pumpkin heaven this morning at the Arboretum’s apple house. The 300+ varieties grown there by John and Jenny Thull are truly something to behold. And to take home! I filled my hatchback and my family better prepare themselves for squash mania. ☺️ All proceeds benefit the arboretum so why not go all out!
Fall is a great time to plant perennials, including these plugs of Pennsylvania sedge grass I just got from @prairie_nursery in Wisconsin. We’re in a drought right now so I’ll have to keep them watered until the ground freezes. Next year I’ll have a nice swath of flowy grass around my new circle patio. Yay! #northerngardener
These days of finding beautiful and tasty things in the backyard to add to supper…they’re growing short. #mngarden #northerngardener #nokomislife
I have so much appreciation and respect for photographers who manage to capture perfect shots of hummingbirds. I’ve been trying to capture this beauty for weeks. I need a full day to dedicate to this! Anyway she’s been visiting several plants in my garden daily and she is a joy to behold, every time. #nokomislife