I finally tried rendering my own lard.  I may never do it again.  The smell was absolutely revolting. (Caveat: my stomach was also a little off that weekend, because I was also cleaning projectile vomit off every surface of the bathroom.  Anneke had a stomach bug.)

Let’s see how this all went down.

I used the crockpot method, as outlined in the wonderful Simple Green Frugal blog. The fat came from my brother-in-law, who buys whole butchered pigs from a farmer in NW Minnesota.  I think he throws the fat in for free.  It sat in his freezer for a few months, then in mine for several weeks.  We thawed it completely before starting.  HOLY COW was that a big bag.  I had to go through the whole process twice. 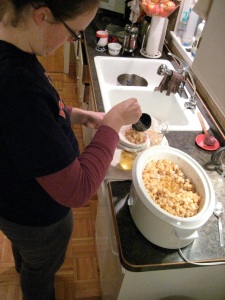 Here I am ladling the melted fat and cracklings into my cheesecloth-covered canning funnel.  I froze all the leftover cracklings and have no clue what to do with them.  They smelled so disgusting I couldn’t bring myself to try one.

Lard chilling out in the snow on the deck. 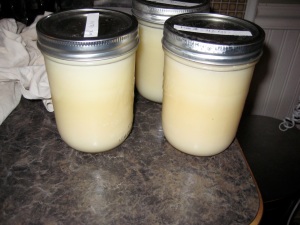 And the final product.  As you can see, it is not the pure white I was expecting.  The “porky” taste is also much stronger than I anticipated.  With my first batch, I thought it was because I didn’t cook it long enough, so I let the second batch cook longer, but with the same result.

I’m confused, because the lard we bought from the co-op was pure white, only smelled slightly porky, and gave no porky flavor to anything we baked with it.  I’m going to venture a guess here:  it’s possible that the stuff from the co-op, which was a little on the expensive side, was pure leaf lard, whereas the fat I used was maybe fatback or caul fat.  The only reason I guess that is because of the sheer amount of fat that was in the bag.  It was over ten pounds.

So, readers, do you think that’s it?  It’s not like the lard is unuseable, it’s just that you have to, uh, develop a taste for it I guess?

The kids sure didn’t seem to notice the ever-so-slight pork flavor in the crust of this otherwise-delicious pumpkin pie.  I think it’s me.  I have an oversensitive palate for this sort of thing.  Perhaps because I was raised on margarine.

SO, if you live in the Minneapolis area and have a hankering to try a half-pint of lard, I have several extra.  As well as a TON of frozen cracklings.  I’m sure you’ll all be knocking down my door, right?

I’ve just completed my yearly review of our grocery budget.  Despite my big goal of reducing our grocery expenses in 2010, we actually increased how much we spent.  #sadtrombone

Yikes, that’s $25 more per month!  How did this happen?  A few reasons off the top of my head:

SO instead of being unrealistic about 2011, how about this: I will just try to hold the line and not increase again this year.  The only major difference coming up this year is that we are discontinuing our CSA.  I was disappointed in the amount of produce we received in our weekly box.  I also have plans for some major garden expansion this year, so we might be able to grow enough of our own to have plenty to eat and still put some by for next winter.