I’m having a challenging summer—is it just me? Do I say this every year?

We found and were raising more monarchs than we ever have, only to discover that many of them were afflicted with something I’d never heard of: monarch black death, a virus that spreads easily (especially when you have 50+ of them in a single holding tank). We’ve lost quite a few caterpillars. We have our fingers crossed for the ones that made it to chrysalis stage—we’ll see what they look like when they come out.

My cucumbers are also suffering. It’s hard to say, based on the U of MN’s “What’s Wrong With My Plant” tool, what’s going on. They either have downy mildew, alternaria leaf blight, anthracnose, or some combo of the three. Thinking back to last summer, I’m almost positive they were afflicted then, too. But I made two key mistakes: I composted the plants in my own pile, then I planted cucumbers again in the same spot. WHAT was I thinking?

Here’s the “before” picture, a week or two ago.

And today, after removing a bunch leaves for a second time. The leaves near the top are still OK, so I’m keeping them for now in hopes of getting a modest cucumber harvest. Happily, my Mexican Sour Gherkin cucumbers (right) are totally unaffected and producing like crazy.

I love these little gherkins! They have a great sour flavor, almost as if they were already pickled.

I have the same exact situation with my tomato plants, though thankfully they’re not quite as bad off. I suspect their issue is septoria leaf spot.

For both the tomatoes and the cucumbers, I’ve been removing affected leaves and sending those leaves out to the city compost—managed compost systems like that get hot enough to kill common vegetable afflictions. My pile is too cool.

But I may need to take a further step, and it’s a radical one: I will likely refrain from planting ANY tomatoes or cucumbers in 2019 in my main garden. I haven’t decided yet how much of the garden I’m going to devote to cover crops and better soil health. I’ll be thinking about that this winter. 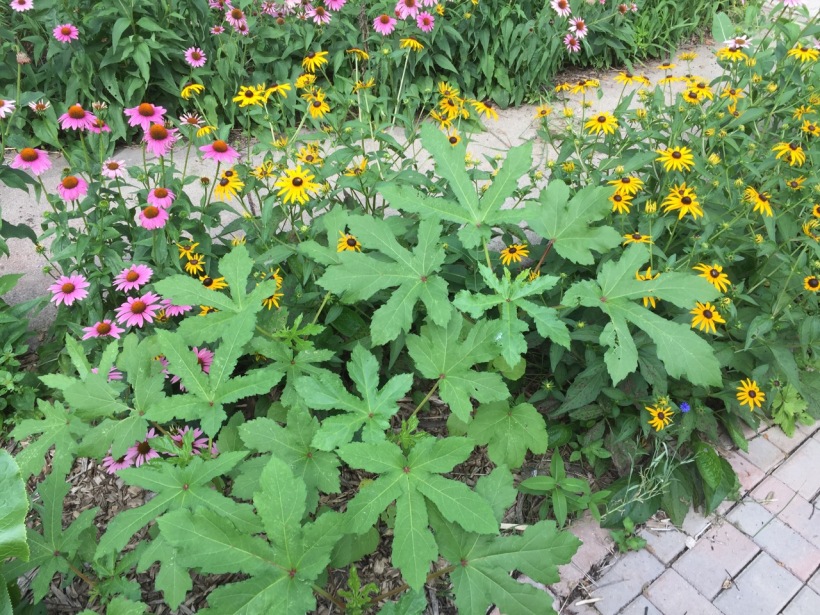 I could interplant some veggies into my flower beds, as I’ve done this year with okra. It looks great with my wildflowers!

A thing happened last week that was unexpected: my southerly neighbor cut down his mature Crimson King Maple tree. It had deeply shaded the southern half of my back yard.  I designed my yard around that tree by putting things like my wood shed and compost pile there—since few things would grow there.

But with a giant open space that is now full sun, it was finally time to add the plant I’ve been dreaming about since we bought this house in 2006: A HONEYCRISP APPLE TREE! 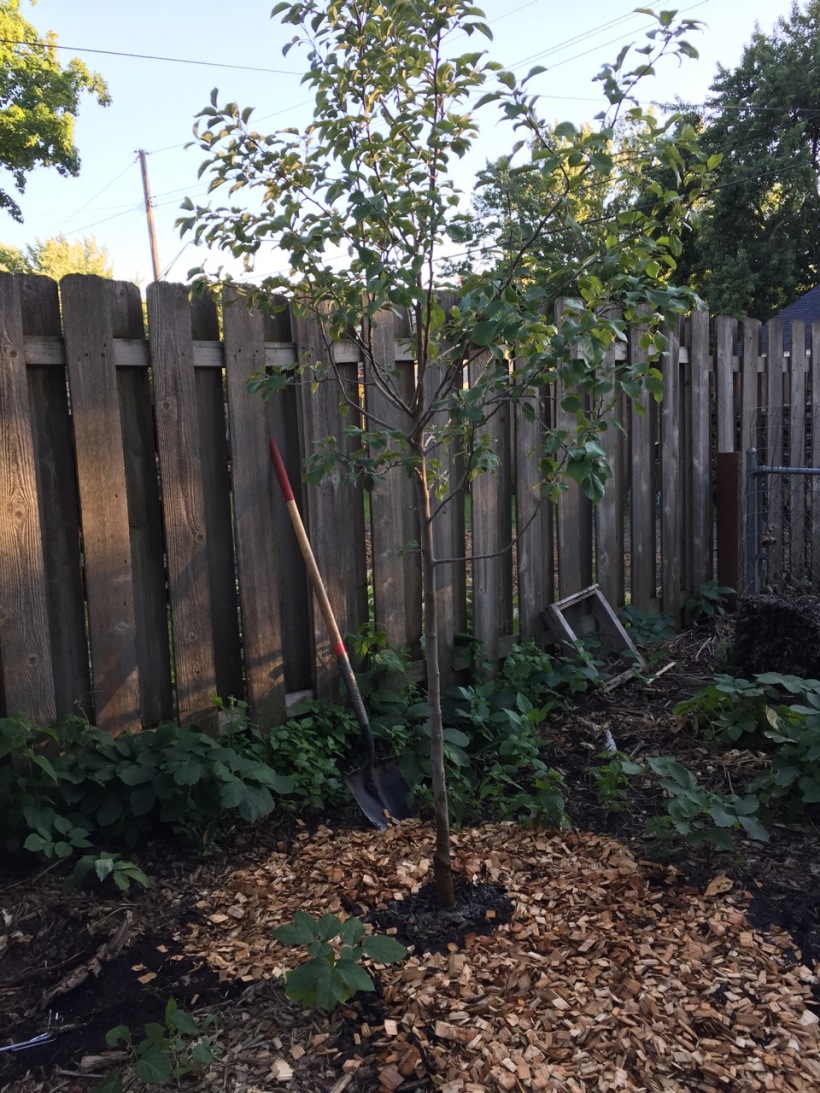 Behind this fence used to dwell a very large maple tree—in front of it now dwells a very nice young apple tree from Bachmann’s. I’ve started buying more of my trees there to take advantage of their warranty (two years you join their loyalty program, one year if not). We went with a dwarf size apple tree because it’s underneath two different power lines.

When our sewer line is redone later this summer I’m going to thin and move a bunch of sun-loving plants from the front to the back, and then put new shade lovers in front. I like having more sun to work with, but the back yard also feels strangely naked. Thankfully two of our three mature trees are still in place.

Raspberry season is underway—and an underwhelming one it is. What you see above is about an average picking every day, whereas usually we’d get quarts. The raspberries are among many plants I’ve neglected a bit over the past two years. It’s time to start thinking harder about long-term health and maintenance.

I’m very happy to report that I have not yet spotted any spotted wing drosophila larvae in my raspberries this year—though they’re in Minnesota now they have yet to find my yard.

Anneke’s been very busy hunting Japanese beetles for me. She’s killed at least one hundred of them already. I’m starting to depend on her for help while I’m gone at work. But since I’m home today, it’s time to get back out there.

Scenes from today’s post-frost cleanup. Tomatoes and peppers are done. Ollas put away to dry out. Found one stray Cherokee Purple tomato hidden in the dying foliage! After making about a gallon of green tomato ketchup yesterday I feel fine with the plants being done.
I did it! I got my garlic planted! I think it’s been at least two years since I found time to do this and honestly silly me, it didn’t take long at all. I dug trenches, stuck in the cloves, filled the trenches with compost, then put the whole area to bed with a little blanket of comfrey leaves. Done and done. #garlic #urbanpermaculture #fallplanting #comfrey
We have a frost in our very near future and it’s gorgeous outside today so I harvested all my remaining tomatoes.
OCTOBER 17. Have never had this many edibles still going strong this late. This could be the last week though?