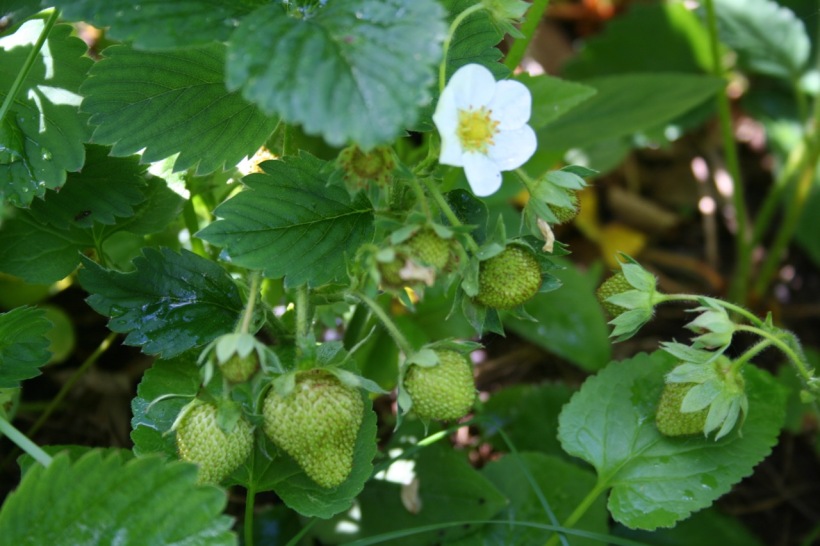 Spring is finally underway, after an abundance of cold and wet weather. From a phenology perspective, we’re all over the place. Some things are 2+ weeks later than last year; other things are early. We’ve already got 20 monarch caterpillars in our living room—Anneke spotted eggs on the milkweed leaves from 6 feet away! This is the earliest I’ve ever found monarch eggs. 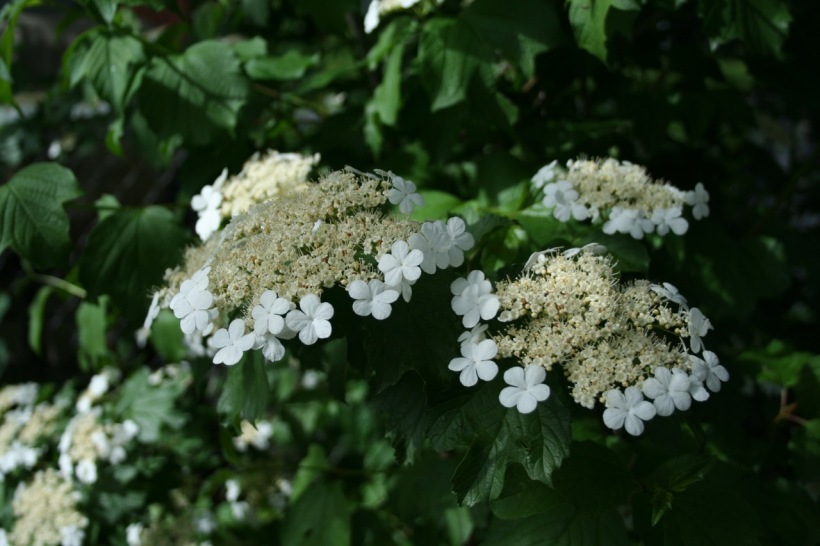 My American Highbush Cranberries are looking great—their blooms are so unique. They have really taken off recently, and are now about 7 feet tall. I appreciate a shrub that can thrive and look this great in the dry shade under a mature silver maple tree. Our understory layer is coming along.

My raspberries (left), on the other hand, are looking less lush than they have in previous years. In talking with a fellow master gardener about it yesterday, I realized that I haven’t fed them in at least 2 years. I picked up a bag of blood meal and sprinkled it on the ground at their feet, then watered it in; I’ll also add some compost in the next week or two. I’ve not always given these the best of care, but they are forgiving plants and keep on going. Hopefully the blood meal will perk them up and we’ll still have a good harvest.

Here’s something new I’m trying: two very small blueberry bushes in a half barrel. My soil is not right for blueberries, so by growing them in a barrel I have more control over soil composition. I mixed half potting soil, half peat moss for this and so far they are thriving. They’re in a pretty shady spot so they may not ever get really big, but that’s fine.

Over on my currant and gooseberry bushes, we’re fighting another sawfly invasion. I pulled hundreds off today; we pulled nearly that many off a few evenings ago. If I can stay on top of them we should still be able to salvage a great berry harvest. I pull the caterpillars off and drop them into a container of soapy water, which is my general method for all garden pests that I deal with. The “EW” factor is high with these guys.

I am happy to report that FINALLY, I have had a successful radish year. I’ve not had the greatest of luck with them, for several years now. This year I planted them around April 12—a few weeks earlier than usual. My thinking was that I could put them where I intended to grow tomatoes and eggplant, and that the radishes would be done by the time I could plant those warm season crops. They weren’t quite, but very close, so I just put the soil amendments and plants around my rows of radishes. We’ve harvested nearly all of them now, and I’m calling this radish year a success.

Some people replant radishes every two weeks and harvest all summer. Growing them in the heat of summer has never worked for my particular microclimate. You have to keep experimenting until you hit on the right timing and right soil amendments for your situation. 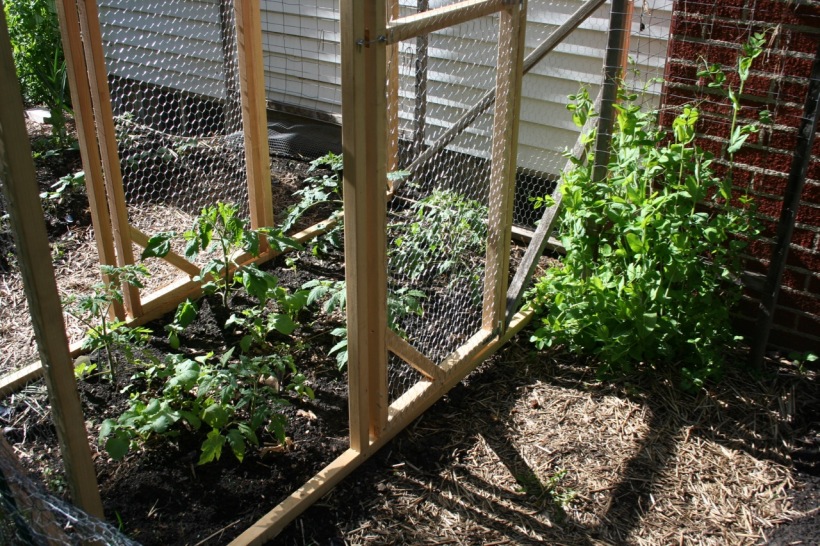 More solutions to our particular problems: pictured here is a new squirrel-proof tomato fortress that we are building. It’s nearly done, just needs a little more chicken wire. It has a door on each side so that I can reach in and harvest. In celebration of this, I’m growing lots of big tomatoes this year—no cherry tomatoes, which I’ve grown in the past in hopes of sacrificing some to the beasts. On the trellis to the right, snow peas are doing quite well (no blossoms yet).

Left to right, garlic, poorly-sprouted beets, and well-sprouted haricot vert green beans. Under the cage/trellis: cucumber seeds not yet sprouted. I had a beautiful line of cucumber seedlings and a squirrel ate all of them. I had to replant. Some day I would like to build a squirrel proof GARDEN enclosure, not just one for tomatoes.

On the west end of the garden, some nice rows of onions, and between them rows of parsnips, which also sprouted nicely. I soaked my parsnip seed this year, and I also planted them very early—we had a very rainy April so I think that was a good strategy as well. They can be finicky to sprout and this was the most successful I’ve ever been. We’ve also got more snow peas and some no-longer-homeless collard greens at the back; finally, a sad dog who wishes he could be right at my side at all times on the deck.

The warnings about planting Jerusalem Artichokes, aka Sunchokes, are apparently not ill-founded. This was three seedlings, last year. They never looked great, and I thought my experiment was a failure….then they turned into more than 15 seedlings this year. I will be sure to harvest at least half of these this fall so that they don’t get out of control. But to get a harvest, really, was the whole point—so I’m pleased.

The kids have spent many hours on their fairy gardens already this year. Anneke’s fairy even has a greenhouse (with the blue plastic). When the elephant’s ears get bigger we won’t be able to see much of this, so it’s fun to get a peek now. Our resident squirrels drink out of her fairy’s pond every day, while the cat watches from the kitchen window in irritation.

We planted a shady rain garden several years ago, and one of the recommended plants was Virginia Waterleaf. This is not the most popular of native landscaping plants due to its aggressive nature. We started with one or two and now they’re all over our back yard. But most of them are growing in places that would otherwise be populated with some noxious weed like garlic mustard, which this is out-competing in a couple places. I’d much rather have Virginia Waterleaf—it’s pretty and it helps pollinators. The rain garden was buzzing with bees today, in between rain showers.

How does your garden grow, this year?