Greetings! Every summer has to come to an end, and this one is no exception. We’re having a hot Labor Day weekend, but there can be no doubt the end is near–Minnesota’s first frost averages around September 21, only two weeks away. Obviously I hope it won’t come that early, but it definitely could.

It’s time to talk about what worked well for us this year and what gave us mixed results. It’s a great exercise to record your successes and failures–especially with gardening–because otherwise you might be doomed to repeat your mistakes.

First new thing for 2015: clothesline! Now that we have the large trellis over our deck in the back, it’s really easy to stretch out a couple of lines from the deck to the swingset. We’ve been putting it up on the weekends. Does it save a ton of money? Probably not, but this is one of those things that just makes sense. I expected to be quickly bored by the drudgery of hanging out sheets but in the end found that it really didn’t take any more time than loading up the dryer–they actually dry faster outside anyway. 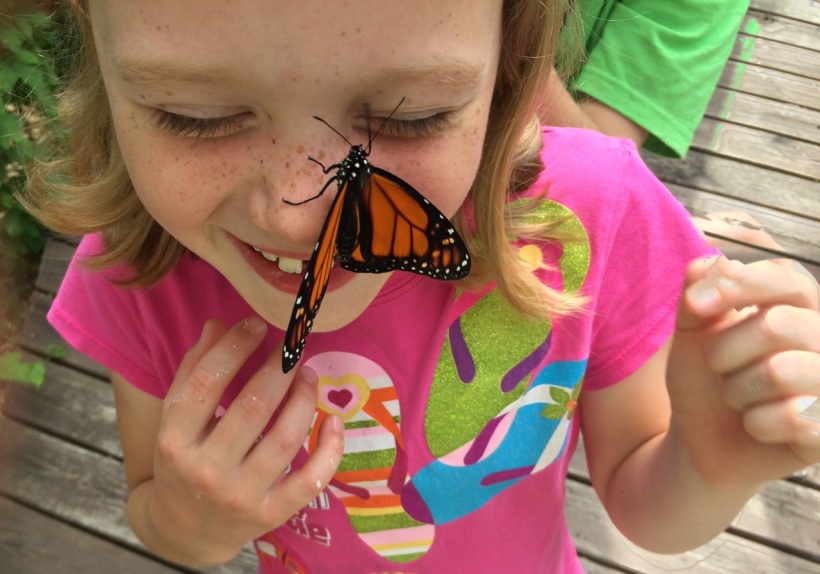 We released 16 monarchs that we had raised from caterpillars this year. I still see some butterflies flitting around, but their breeding season is over and they’re on their way south now.

In August, we took a trip up to the very tip of Minnesota’s arrowhead, camping at Judge CR Magney State Park and hiking Grand Portage State Park (among other adventures). Here’s a view of Canada, across the Middle Falls on Pigeon River. I can only hope that the next time we see this it does not have a fence anywhere in the picture. Common sense will prevail, right? At least in this one small area?

On a whim, we bought an egg sac of praying mantises in May. They hatched in June, and we released them all over the yard. We didn’t see any for quite some time, then in the last two weeks we found two of them in different areas. THEY ARE HUGE. Also: they’re working. I have zero aphids on my flowers, which are usually covered with them by September.

Despite this effectiveness, I still have mixed feelings about the mantises. They’re not native to the United States–and they kill both beneficial and pesty insects. I’m particularly worried about whether they killed any monarch caterpillars. My proposed solution to the kids is to capture them and donate them, in a terrarium, to their school’s STEM teacher, who can feed them crickets in the winter. Now we just have to catch them.

I get more forgetful all the time. So this year, when drying herbs, I wrote myself helpful notes at the bottom of the basket to help me remember what everything was. Many of them end up looking alike when they’re all dried out. You can always crush a leaf and eat it, in order to guess what it is, but this made it very easy.

Apparently my skill with carrots is similar to my skill with archery: wildly inconsistent. I tried the Chiot’s Run carrot method this year and got mixed results due to less-than-ideal germination rates. I had to reseed the entire thing in late June, and those newer carrots are just not catching up. I’m trying the method again next year (as far as the template part goes) but I’m going to put more seeds in each hole, and cover it with a little potting soil, not just the rice hulls.

Parsley keeps growing wild all over my garden, and this year has been a banner year for it. These petite Black Eyed Susans are new; transplanted from a co-worker’s garden. I’m making tabouli this afternoon. One of the great things about curly parsley (besides the fact that it keeps coming back), is that it’s very frost tolerant. If it doesn’t get covered by snow, I can still harvest it into November.

This was the first year of growing brewing hops on our new trellis. They didn’t provide much shade, but from what I know of hops we’ll have much bigger plants next year, so hopefully we’ll get more screening and shade in years to come.

School started two weeks ago already. Minneapolis has a very early start. One of my kids’ favorite lunchbox treats is kohlrabi chips. Simply peel and slice kohlrabi, sprinkle with salt and pepper. They are delicious, easy, and nutritious. I am going to try harder with kohlrabi in the garden next year–it needs A LOT of sun for a long time, so I am going to give over some of my pumpkin and potato space at the community garden plot to some kohlrabi.

I’ve never seen anything like this broom corn that Rowan planted this year. We got the seeds from his STEM teacher and planted it on a whim. It’s 14 feet tall! I don’t know if we’re actually going to make a broom with it, but we’ll definitely make some pretty dried flower arrangements or maybe even a shock of corn for Halloween decor. That stuff has been unreal, and survived a few high wind events to boot.

Here’s another native plant I want you to think about: Solomon’s Seal. I’m growing it in a very challenging spot: dry shade. It took a few years to get established, but now it is starting to flourish and spread. It is a beautiful choice, particularly if you want to add more native plants to your garden and are afraid you might not be able to distinguish weeds from plants. It has a very distinctive form, is easy to grow, and birds like the berries (which are poisonous to humans, by the way). This one is in my back yard in some dry shade under a large Silver Maple, but next year I’m going to add some more in the front yard under my large Elm. I have tried *many* different ground covers under that Elm and have not had very good survival rates. So, here’s one to try for 2016.

Lest you think harvest season is nearing an end: we’re not even close to being done. We have at least half our potatoes still left at our community garden, all of our pumpkins, these True Red Cranberry dried beans (still growing; we don’t pick them until they’re dried out), and lots of cucumbers, tomatoes, and peppers still coming like crazy. Adam also hopes to harvest a deer: bow hunting opener is just two weeks away. He was unsuccessful last year, so we’ll see what happens.

I’m planning on harvesting another big round of herbs for drying as soon as the weather cools off–herbs tend to have better flavor when it’s cool. We also have quite a bit of kale growing in various places around the yard. In a couple weeks, I will pull out the seedy and weedy lettuce in my stock tank, transplant all the kale in there, and put on the hoop house. Then hopefully we’ll have kale into November–maybe December?

Happy Labor Day to you, and thanks for reading!