Apparently, it’s not just me: 2015 is a banner year for all berries in Minnesota! We’ve had bumper crops of strawberries and currants, and the raspberries are just getting started. We even got a handful of cherries from our tiny new cherry tree. 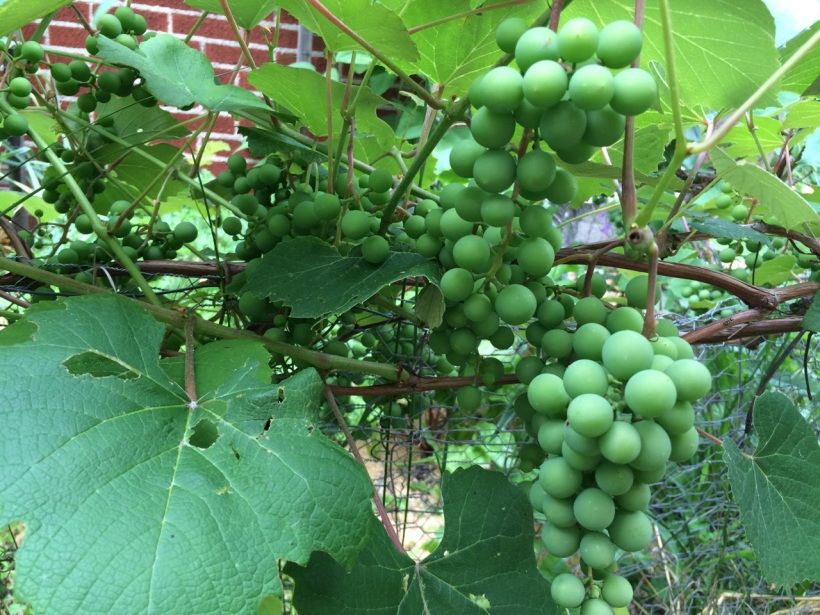 We have quite a few grapes on our vine–I am not sure what variety these are but they make a nice jelly and aren’t bad to eat fresh either (they turn purple when ripe). We only get grapes on this thing every 2 years or so, due to multiple factors including rabbits frequently mowing the vine all the way back to the ground some winters.

I don’t get too uptight about grapevine beetles; they don’t cause fatal damage to the plant. But six of them could defoliate the whole thing and that could hurt my grape harvest for this year–plus I want to control them as much as possible since I have two baby grape vines in the back yard that I’m keen to protect. So, to control them: just knock them into a container of soapy water. They’re very easy to catch.

I’ve never had a red currant year like this one. We had to resort to making triple batches of Amy Thielen’s red currant compote this week. It’s delicious! We now have 12 half-pint jars of it in the freezer. We also made Adam’s favorite red currant pie.

Our gooseberries are nearly ready, and the bush is so laden with fruit that a couple branches broke off. We’ve been watching Mind of a Chef season 3 and I also recently read Fäviken (the book), so there’s been all kind of Magnus Nilsson-inspired cooking and preserving going on. Above, we salted green gooseberries, fermented them on the counter for two days, then put them into our pickle/beer fridge. We’ve also tried his herb salt recipe (here’s an adaption of it) and plan to make *a lot* more before the summer’s out. 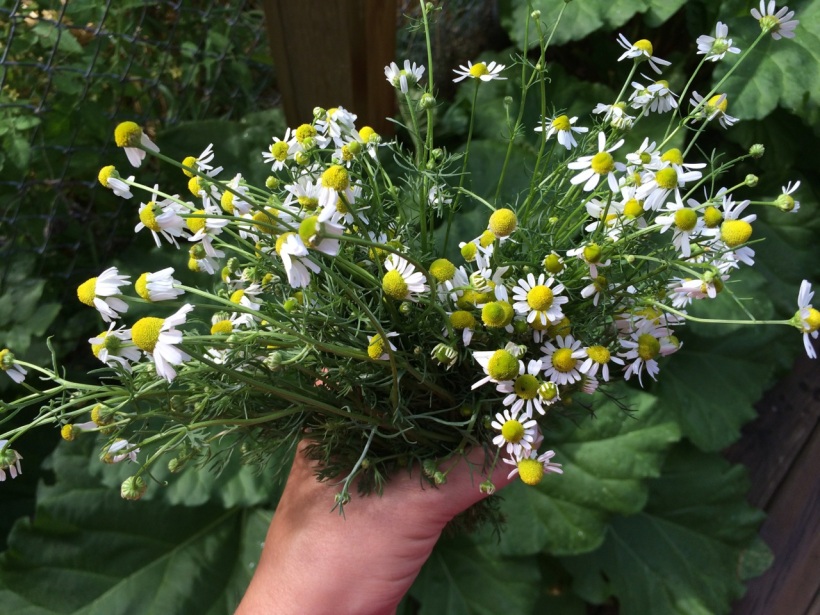 Another garden success this year has been my herb spiral! I’m getting significantly more chamomile (shown above) than usual. I’m hoping to dry a greater variety of tea herbs, including a few new ones (to me) this year: stevia, lemon verbena, and feverfew. The stevia and lemon verbena have been instant hits, both fresh and dried. I’ve gotten a ridiculous amount of feverfew–perhaps three plants was a bit much?  I tried it the other night in a cup of hot tea and it tasted complex and interesting, but medicinal. I think I’ll need to blend it with some other herbs. And next year one plant will be plenty.

Things are coming along fine in the main garden, too. My carrots did not sprout nearly as well as I hoped, and my peppers are disappointingly small AGAIN this year, but everything else looks good, including this fourth picking of Maxibel haricot verts beans. I can’t recommend them enough, both in terms of productivity and taste.

One of our non-garden-related goals for this summer was to get out fishing more! The delightful result has been some gorgeous days at various MN lakes and several nights of fish tacos.

We’ve released 7 monarch butterflies so far this year, with more caterpillars munching away in the critter cage as we speak. This one, which we released two weeks ago, sat on a coneflower for the longest time, and then as I leaned in as close as possible to take a photo, it suddenly flew away.

It’s not difficult to spot female monarchs laying eggs on milkweed plants. We watch for them, and then bring leaves (the eggs are always stuck on the underside of a leaf) in before the tiny caterpillars even hatch. This way we can ensure a very high survival rate–no worries about predators or bad weather.

I keep hearing from other people who have planted milkweed and not seen any monarchs yet in their yard, but I say: don’t lose hope. I think the reason why we started seeing them within two days of the first time we ever planted milkweed (no kidding) is because we live in close proximity to Lakes Nokomis and Hiawatha, both of which have large shoreline restoration projects with monarch habitat. So they’re in our neighborhood anyway. But if people keep planting milkweed as enthusiastically as they seem to be this year, we have reason to hope.

Anyway, that’s my update! You can always follow me on Twitter for ridiculous numbers of garden photos and updates on a day-to-day basis.

3 thoughts on “A banner berry year”