A first for me, in 2013: I am using cover crops both at my home garden and at the Sabathani community garden plot that I manage. Here’s Sabathani: 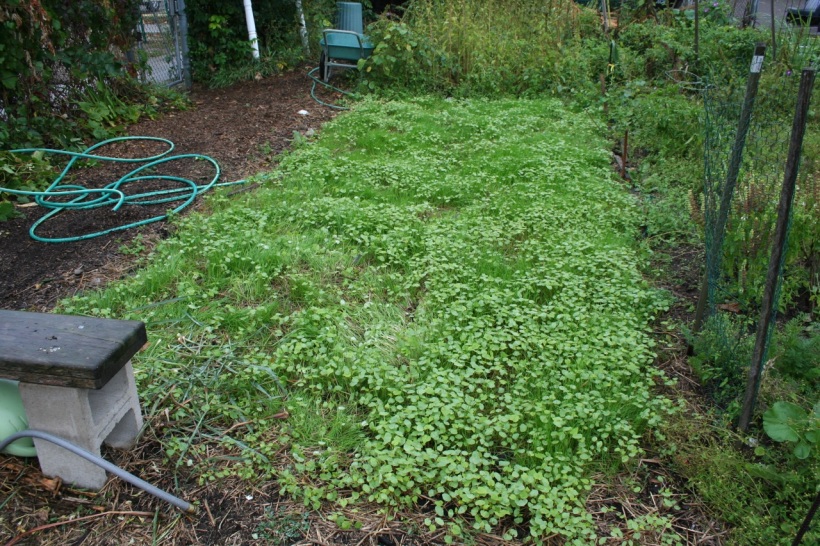 I planted this nearly a month ago, on September 16. Over the last two years at least, our plot at Sabathani has been riddled with disease. I’ve got the weeds under control now, but the insects and diseases translated to a less-than-average crop last year and a poor one this year.

Since the plot was producing next to nothing in early September anyway, I ripped out all the plants and put in buckwheat and annual rye. It might take a few years of doing this and other measures, but I’m hoping that by increasing soil fertility, I can improve my yield at this plot.

So, cover crops. How do they help? Mostly, they are about suppressing new weeds and creating a bunch of organic matter that is easily turned over into the soil in spring. On-site composting! There are a number of different options depending on your needs. I chose buckwheat and annual rye because they will both be killed by a frost, so in the spring I’ll simply have to turn the dead plant material over and start anew. Also, Southside Farm Supply (my new favorite neighborhood store) had both in stock, so that was also frankly a big point in their favor.

I was so impressed by how this went at Sabathani, that I decided to rip out most of my home garden yesterday, too (except the kale, Christmas lima beans, and rosemary). 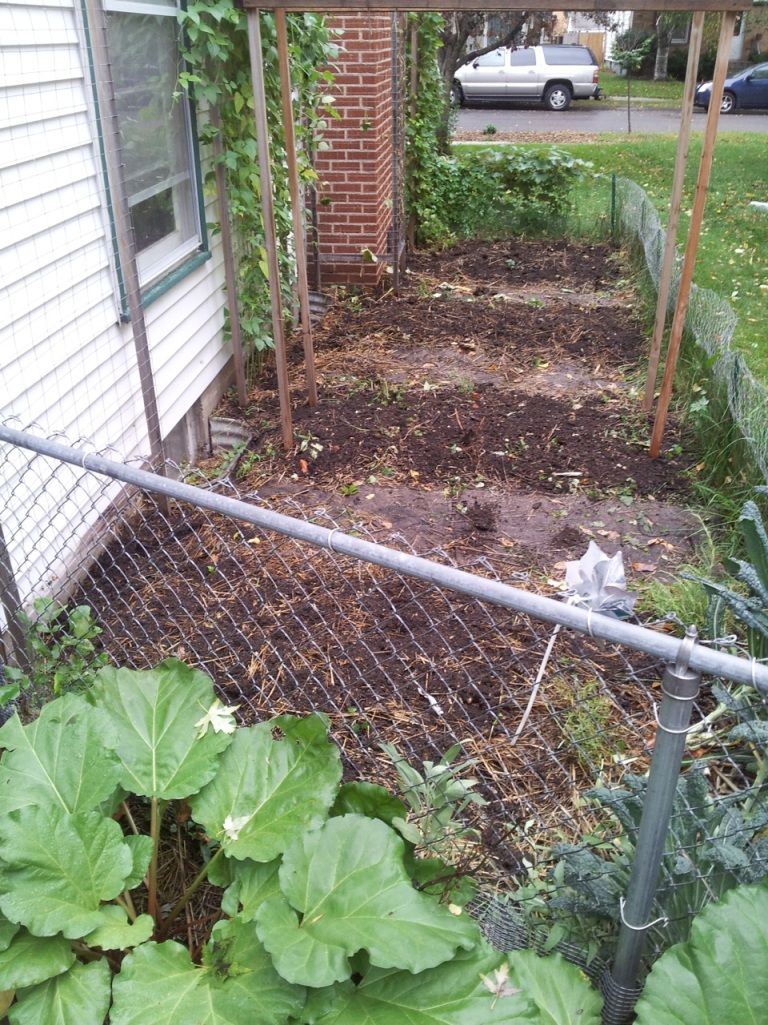 I hemmed and hawed about this for a couple of weeks, but as we are now nearly a full month past the first average frost date, it was now or never. Hopefully the seeds will have time to sprout and grow an inch or two before we get a killing frost.

I’ve been thinking a lot lately about short-term vs. long-term gain. The plants that I removed yesterday were still very much alive and producing, albeit very little. But this year, anyway, I decided that the long-term health of my soil was more important than another handful of tomatoes and (maybe) one more quart of pickles. We’ll see if my strategy pays off.

It seems like I have fewer pest and disease problems every year at my house. 2012 and 2013 were VERY different years, weather-wise; yet I had what I would deem a mostly successful garden both years, with few problems. Could it be that I’m getting better with practice? Well, I wouldn’t want to brag.

I found a couple of University of Minnesota Extension resources on cover crops that I thought were quite useful:

Cover Crop Options (table of crops, when to plant, benefits of each, etc.)

Both of the above links are written for farmers, but they are completely applicable to home gardeners interested in improving their soil.

The hard part about Minnesota, of course, is that our growing season is so short, and our winter so harsh—it can be hard to fit a few weeks in for growing a cover crop. In milder climates, cover crops are planted in the fall and grow all winter. Not so here in the north land, where NOTHING grows all winter. Uh oh, here comes another “I’m annoyed by permaculture people whose ideas/advice are all based on living in milder climates” moment. Well, at any rate, you have to try and make the most of where you live, and a Minnesota winter has its charms, too.

What do you think? Was it even worth it to plant a cover crop at my home garden this late in the game?

One thought on “Cover cropping”

I love my city. #minneapolis #nokomislife #minnehahacreek
My leeks had much better germination than my onions. Oh well. Green things! Growing in my basement!
New issue of @mnhort Northern Gardener magazine is out! I feel so honored to have my name next to @monarchgardensbenjaminvogt. His article was super timely for me as I continue to evolve my urban mini-prairie and make it look appealing to normal people.
Seriously exciting lunch break over here as two red tailed hawks tried to ambush a squirrel on our grapevine-covered arbor. Miraculously the squirrel got away. This time. #nokomislife #frnng @frnng_mpls #onlyinmn #mplslove