About three years ago, Adam and I decided to plant the boulevard, where grass barely grew anyway, with a flower garden. The plan was put on hold when the city informed us they were going to replace our sidewalk, then waited 18 months, then finally did it. After they were done late last summer (they did make a mess of the boulevard) we put down cardboard and wood chips to smother the newly-sprouting weeds.

This winter, while everything was covered with snow, I came up with the following plan: 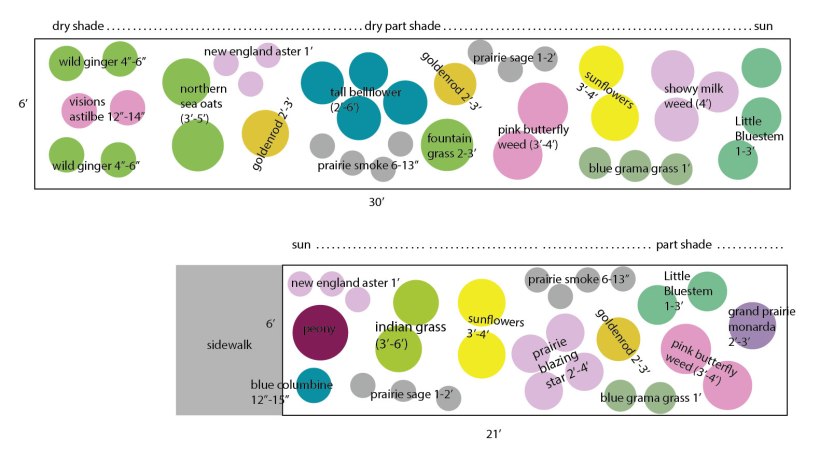 Explanation: it’s my boulevard cut in half and stacked. To the left is north, to the right is south. In real life, obviously, it’s all in a row. I planned to get some of the plants from my kids’ school’s plant sale, and the rest from the Friends’ School Plant Sale.  And yes, I’m aware that peonies aren’t native, but I had a homeless one and I couldn’t just kill it. I’m also unsure about whether this particular astilbe is a native or not.

It features almost all native plants, which are well-suited for tough, dry, salty, foot-traffic-heavy areas like boulevards. Also, since I’d rather not grow food for myself where so many dogs go, I might as well grow some food for birds and butterflies.

Fast forward a few months, and things went a little differently than planned on planting day. I decided to go ahead and produce a designed version of how this turned out, to illustrate the art of landscape design fantasy vs. reality, which I am still new at.

Let’s talk about the differences.

For starters, I could not dig holes big enough for the astilbes on the left (north) edge of the garden. The tree roots were too big there (a mature elm tree is directly to the north of this garden). So I’m hoping the wild ginger will just fill in there.

Also, you’ll notice we now have a stone tile path (using some old leftover slate tiles we’ve had in the garage for ages). I realized early on that it might be a bit rude to not offer pathways across what is, in reality, city property. Many of our neighbors and guests will be parking cars along this garden.

The right (south) side of the garden is also a bit shorter in real life because… we ran out of gas. Adam said “I am NOT digging up ANY MORE SOD this spring!” So we have a very small amount of weedy lawn left surrounding the monarda on the southern end of the garden. We’re going to mulch it thickly and see if the monarda just spreads and fills it in—knowing monarda, I don’t think this is an unreasonable expectation.

The other big confusion I had was about the Asclepias Incarnata. The Friends Sale had it listed in their catalog as “Pink Butterfly Weed” and for whatever reason I didn’t look up its Latin name to read more about it. If I had, I would have learned it’s more commonly called Swamp Milkweed (I actually have it elsewhere in the yard, d’oh), and it prefers damper soil than what it will get here. But, on the other hand, IT’S MILKWEED. Weed is part of the title for a reason!

I also added in the Canada wild rye that we sprouted from seed we brought home from a prairie restoration in South Dakota last summer. I’m not certain how tall it will get; where we saw it growing it was only 2′ or so, but it may have been mowed once during the season.

Last but least, a relatively recent picture (before I did some much-needed weeding). 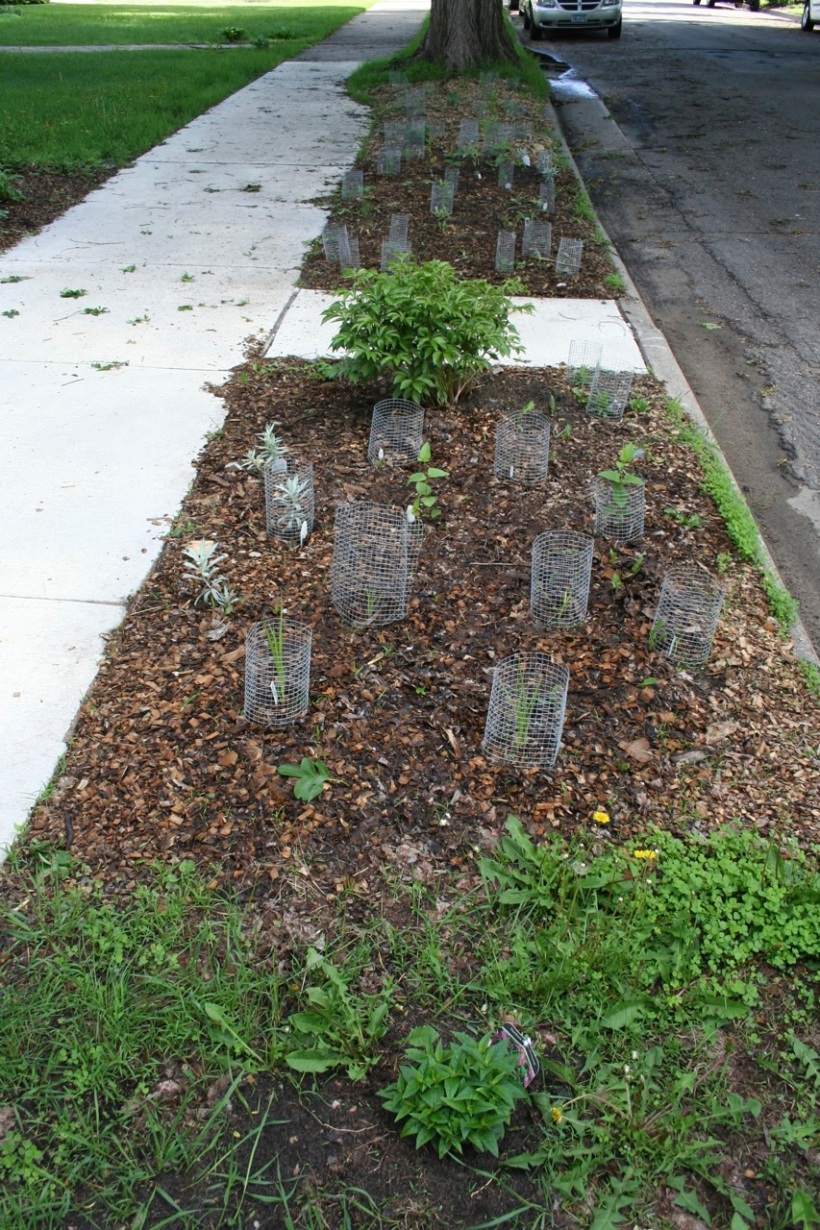 This is looking north. You can see the very happy peony; I’ve never seen a transplanted peony look nice so quickly. Must have been the cool rainy six weeks that followed the day we planted everything. The cages are for rabbit protection and as a not-so-subtle reminder for people to keep their dogs and feet off my new plants. I will leave them on through the fall this year, but I don’t think I will need them next year. This is just one of the great things about native plants.

I’m very gratified that the rabbits have shown little interest in any of these plants. My theory is that because this is an open space, they don’t feel comfortable lingering long enough to do major damage. But…. we’ll see.

(I should be ashamed at how weedy it is around the monarda there in the middle of the bottom of the photo, but… well… you do what you can!)

Upcoming posts: I plan to do a solstice garden update, talk about my favorite [edible] weed of all time, and let you know how my back yard landscape is coming along, now that we’re on our way with year two. What’s going on in your garden?

One thought on “Boulevard Butterfly Bonanza”