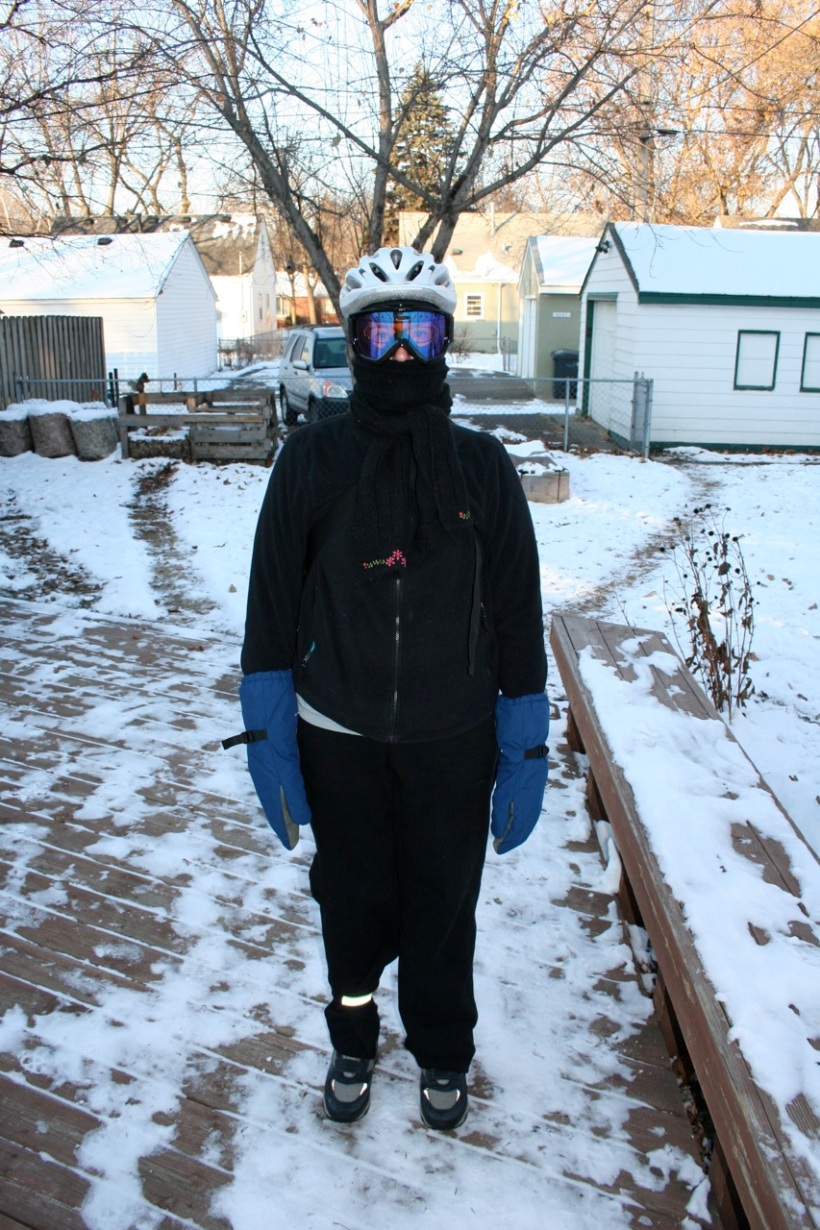 Well, it’s here. Wintertime in Minnesota. (Yep, that’s me under there.) I’ve been out on my Nishiki (now converted to a single speed) at least 8 times. I only wear the goggles when it’s less than 10 degrees (F).

Many people like to include windbreaking tops or bottoms, but I find that I get way too overheated when I do that — especially after a few miles of biking.

I have to be honest and admit that the start of this, my second year of really dedicated winter biking, has been uninspiring. Last year at this time I was all “yeah, I’m hardcore!” and “this is an awesome challenge!” and “I’m burning 8,000 calories right now!”  This year, I’ve been dreading it since early November.

I tried a few different routes the first part of December. Chicago Avenue was pleasant in the morning, but really busy in the evening. Bloomington Avenue was busy both morning and evening.

This week, I went back to my normal bike route —it involves mostly neighborhood streets — and it went better.  I see two choices in winter bike commuting:

1. Move slowly because of slippery conditions.

2. Move slowly because of slippery conditions and have cars rushing closely past you, scaring you out of your wits.

For me that’s a no-brainer, though I know other people feel differently.

The most important thing I learned last year was to slow down and embrace the fishtail. At first, every time my rear wheel would fishtail even a little bit, I would panic and put my feet down. An hour later I would arrive at work, totally exhausted.

You’re not going to wipe out every time you fishtail a little bit, and you will be much calmer when you realize this. Think of yourself as a cyclocross rider, or remember how it feels to drive your car fast down dirt roads. There’s a little bit of shimmying, but if you just roll with it you’ll be fine.

Oh and one more thing: I love my studded tires. They make a huge difference.

Anyone have advice for staying the course with winter biking? How can I get that hardcore feeling back?

Update, 12/28/2011: Lucky for me (but unlucky for my perennial plants), the little snow that we got in early December melted quickly.  It’s been dry and unusually warm and I’ve been taking my fixie bike, and wearing the same number of layers I usually wear in October. What a strange year! I’m sure it’s not likely to last…

One thought on “Winter bike commuting”

Been finding it hard to find the will to make dumb Instagram posts about my dumb garden with everything *waves hands around* going on. But I did get a really nice picking of green beans and baby carrots tonight. So that’s something, I guess. #butterovertoomuchbread
I planted Prairie Rose (Rosa arkansana) years ago in a spot not far from here. It’s been moving around the yard ever since—I think it wanted more sunlight because now it is taking over a sunny patch right next to the front sidewalk. It smells heavenly and the bees love it so I don’t mind. But be aware if you plant this—it’s an aggressive one. We’re constantly pulling it out of an adjoining brick path. #nativeplants #nativeplantsofnorthamerica #pollinators
It’s all happening. Black swallowtail laying eggs on my carrots and dill, gooseberries, peppers, bolting mustard greens, oh my. It’s summer.
Time to bag up the honeycrisp apples. Several of them already had some damage. My tree looks a bit silly! The product I use is Maggot Barriers and if they look like the little footie nylons from a shoe store, yep, that’s basically what they are. Not sponsored. 😆 But they’ve worked well for me in the past. #honeycrisp #applegrowing