Wow, am I happy to be back here. I’ve been buried in a work project for over a month. My neglected garden is winding its way down for this year, but that’s OK. Some final pictures and thoughts:

One of the bigger celeriacs I pulled. We planted 6 of these, and ended up getting about 10 total bites of food from the whole business. They were 1/4 the size of the ones we received in our CSA. I had this one really great crop of parsnips the first year I had a real garden (2008), but since then my root vegetable crops have been very uninspiring.

The collard greens and tabasco pepper plants that I put in on July 4 did very well in their little tub. We’ve had several collard greens meals just from that one plant. The fall radishes in Rowan’s garden (foreground) never got thinned, so they didn’t amount to much due to overcrowding.  Rainbow chard in Anneke’s garden is still going, too. Thank goodness for greens — the only great success I had this year.

The kids helped me separate some dried beans from their shells, a tiny harvest. Apparently many people in Minnesota had bad luck with beans this year — just as they were blooming, we hit a perfect storm of intense heat (which makes bees stay home) and torrential rains (which knock off blossoms). So a reduced bean harvest was had by all, not just me.

2 c. of Cherokee Trail of Tears black beans, and about 3/4 c. of Christmas lima beans. We will likely get a few more of each.

Here’s what sticky traps look like when you remove them from your apple tree in the fall. GROSS! What’s that, you say, you want to see a close-up? OK:

The insects are a lot harder to identify than I thought they would be. I guess many of them have been stuck on there for a long time.

We harvested our potato bin this weekend. It looked promising at first!

Baseball’s in there for size reference. We ended up with mostly tiny potatoes, maybe 5 lbs of them total. You may recall last spring, we planted about 5 lbs of potatoes. Huh. If I do this again I would not use any leaves as filler — they clumped together in huge chunks that no potato could grow in. I think I’d need more straight-up garden soil between each layer of seed potatoes. 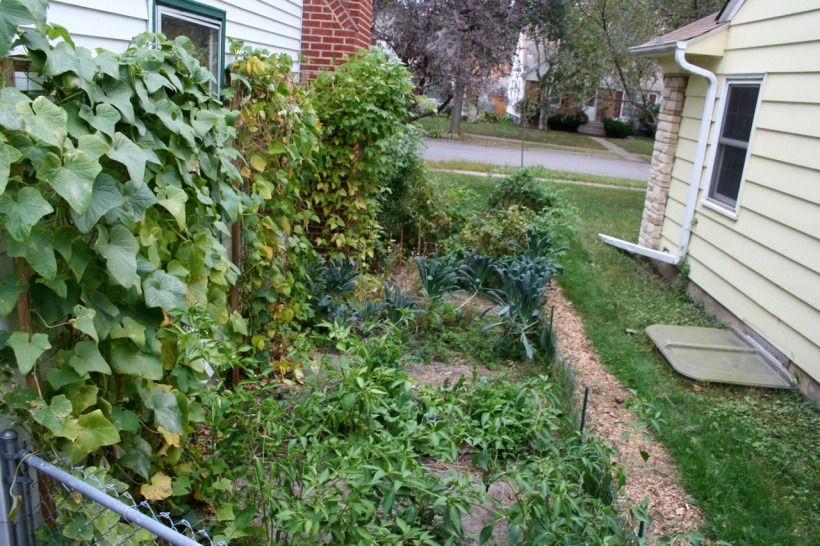 A final view of the garden. Lacinato kale is still going strong. Everything else is dying off. A couple other notes from this year:

– Purple “cosmic” heirloom carrots are very hard to pull out of the ground. They’re cool looking, but only if you can manage to pull them in the first place! Perhaps they should be dug more like parsnips.

– Don’t bother with fennel or chamomile in part-shade. The chamomile will get few to no blooms, and the fennel will get very leafy but produce no bulb.

– We’ve cut up and frozen at least 12 gallons of apples for pies, crisps, and apple oatmeal this winter. Yay apple tree!

So there you have it: if you plant a great variety, you’re guaranteed at least some successes.

Look, the squirrels missed a cucumber! This is the first and only one I’ve gotten out of their little clutches. A nice digging of potatoes, and plenty of tomatoes kept safe in their squirrel-proof fortress.
Garlic has been curing and keeping vampires out of my garden shed for two weeks now, so time to process it. I also braided up the shallots that I harvested earlier this week. Pretty tough to braid hard neck garlic so I just use string to knot each one into something I can hang up. Bonus Sunday Buckles and Clarence last frame. 😍
A tale of two plant tags. I only looked at the one on the right—full to part shade. Perfect. After I planted these I noticed that not only are these two the EXACT same plant, they have two different descriptions / directions!
Drinking wine and arranging artful harvest displays. A lit Wednesday evening. I am obsessed with my cut flower garden and it’s really only just starting to really roll! I’ll have dahlias soon! (First time ever.) pickling these peppers and eating the carrots with some hummus. These are the moments that gardeners think about in January. #mngarden #northerngardening #northerngardener #nokomislife #zinnias #seedsaversexchange