Here’s a little gem of a book that’s useful for beginners, people who have grown flowers but not food, and people like me who already do both.  If nothing else, this book has major vegetable eye candy.  Just take a look at the author’s garden vegetable photo gallery to get an idea — vegetables can be very beautiful in the landscape indeed.

The book has ideas — with diagrams — for several different landscape situations (including containers), as well as plant guides and lots of top ten lists, such as “Graham’s top ten shade-tolerant food plants.”  In everything, he considers form as well as function.  He wants plants to look good at a distance, up close, and with each other, creating a beautiful and harmonious landscape.  He mixes flowers and fruits with cabbages and runner beans, and the results are gorgeous. 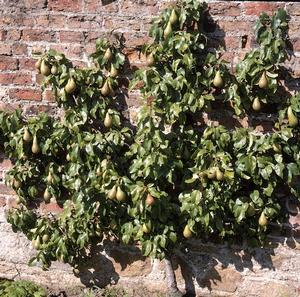 Rice is also very fond of putting in very young pear, apple, and peach trees and training them to grow in a fan shape against a wall or fence — this way they take up very little room and provide a beautiful backdrop for other fruits, vegetables, and flowers.  I am really unfamiliar with this technique but I am intrigued.  Not that I really have space for it in my current yard, but I’m definitely going to keep it in mind.

I would put this book on the highly recommended list if only for the inspiration those pictures brought me in the bleak month of February when I was reading it.  This book is a great way to get into more of a permaculture mindset without having to read about peak oil or composting toilets.  Not that those things aren’t important, mind you, but there are kinder and gentler ways to start, and this book is one.

Rice doesn’t really go into it all that much, but there’s also a companion planting aspect to all this — flowers attract bees which help pollinate your vegetables.  Interplanting lots of different plants helps confuse and deter pests — this is Integrated Pest Management 101.  A row of cabbages plus cabbage moths may equal a whole row of lost cabbages.  Cabbages spread out in different areas of the landscape, mixed in with flowers, might mean only 1 or 2 lost to cabbage moths.

If Minneapolis had planted a bunch of different species of trees instead of just one species of elm — by the thousands — our boulevards might not have been so devastated by Dutch Elm Disease.  Some elms may have even been spared because they need to be in close proximity to each other for the disease to spread.

But I digress, majorly.  Here are the ideas I’m going to try this year, from the book:

1) Keep on continuously starting more seeds through the months of May, June, and even into July.  That way as you pick things like kale out of your combined flower/vegetable beds to eat, you can pop in a new plant and avoid having bare spots all over.

2) Make beautiful containers of things like mint, nasturtiums, and sage.  Bonus: the container will keep the mint from taking over your garden.  (I’ve not yet tried growing mint but I have been warned by several different people now to be careful with it.)

3) Curly-leaf parsley — the most useful plant I have EVER grown — looks really, really great in the landscape with a couple of cute little petunias or violas mixed in with it. Seriously, you can put parsley in pretty much everything you eat — it becomes addicting.

4) I really ought to work an evergreen plant or two in my landscape — I have very little “winter interest” right now.

5) Someday, but not this year, I’d like to try growing a purple brussel sprout or two mixed in somewhere with my flowers.  They look really neat.

Rice also listed some common edible flowers, including: calendula, day lilies, geraniums, nasturtiums, sunflowers, and violas.  All good choices.  I also want to try Jerusalem artichokes, which look like sunflowers, but which apparently are fairly invasive.  So I might try them in a pot.  SO MUCH TO DO.  I have to try and control myself this year because with starting a new job, I’m going to be able to take days off work to garden, and there’s only so much one can do on evenings and weekends.