It’s March, so time to start some seeds for my garden.  Last year I experimented with starting seeds of some hardier plants earlier, in February, and then planting them out in April.  The results were decidedly mixed.  I also was disappointed in my Burpee Ultimate Seed Starting System that I had purchased.  Everything sprouted, and for that I should be grateful, but it was really difficult to get the seedlings out of the tray.  I damaged many of them in the process.  Also, I pretty much had to destroy the tray in the process of removing them.

So for this year, I kept the felted bottom piece and the plastic cover and made my own system:

Generic tray, plus felt, plus peat pots and soil, plus (obviously) seeds. 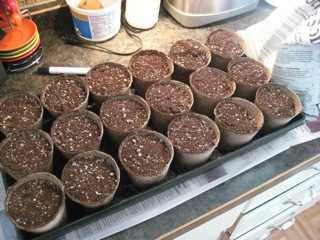 Before adding the water, I placed it in a nice warm spot: the top of my refrigerator.  This way I [theoretically] do not need to buy a warming mat to get those seeds sprouting.

I watered thoroughly, planted the seeds, and then I’ll be using a mister to keep things nice and moisturized until they sprout.  I hope they sprout.  We’ll see.  I planted 6 tomatoes, 9 banana peppers, and 3 beets.  I figure I can plop the beets somewhere in my flower bed in mid-late April for a little early spring beet goodness before CSA season starts. 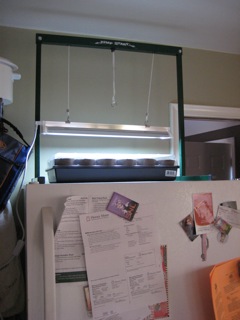 I had big plans for Adam to custom-build something almost exactly like this, but when he found the Jump Start system for $40 on ebay, he decided it wasn’t worth his time to do all that work.  I have two things to note about the Jump Start so far:  firstly, it is a bit on the chintzy side.  I was trying to slide it around on the fridge and the whole thing kinda collapsed and fell to the floor — happily the bulb did not break.  Adam kindly put a couple extra bolts in the upper corners just to make it a bit sturdier.  Secondly, I had ultimate plans to purchase two of these and squeeze both of them on top of the fridge, but I realize now there is only room for one.

Now on to the second part of my seed starting experiments for 2010: starting seeds outdoors.  My Master Gardener mentor was telling me about this, and she even made me a copy of a how-to article from Northern Gardener magazine.  Unfortunately, this article does not seem to be available online, except for this PDF preview.  Basically, you create mini-greenhouses from various things found in your recycling bin.  The freezing and thawing that naturally occur outside [supposedly] loosen the coating on the seeds, making them sprout easier when the weather warms up.  WE’LL SEE.  Here’s what I did, for posterity:

In the interest of science, I used several different types of containers.

I cut the milk jug, water jug, and 2-liter bottle in half, then cut air holes in the tops of the lidded containers and drainage slits in the bottoms of all the containers.  I would recommend you use a utility knife, not an exacto like I did.

I set the containers in a sheltered, sunny spot and filled them with dirt and water until it reached a muddy consistency, then popped in my seeds.  I planted one or two of several different things, including herbs, tomatoes,  cabbages, and celeriac, just to see what happens.

I put the covers back on, attaching with duct tape where necessary.  Now I just wait, and keep an eye on them in case they start to dry out.  When the weather really starts warming up and the seeds have sprouted, I can start to gradually increase the size of the holes on top, eventually removing the tops altogether to harden the plants off in preparation for putting them into the ground.

I followed the process that the article outlined, so I’ll let you all know what happens, both indoors and out.