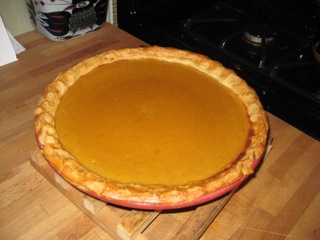 Yes, you read that right.  We’ve been experimenting with lard, on and off, for a few months now.  We’ve cut really, really far back on most processed foods in our lives, but there was one thing we still needed ye olde tub of shortening for: pie crust.  Adam is semi-famous for his pie crusts, and was reluctant to trade in something that he knew worked well for the unknown.

Now the results are in: he finally made a pumpkin pie crust with lard instead of vegetable shortening, and I am telling you: it was the most delicious crust I’ve ever eaten.  Light, flakey, and the kids went crazy for it.

We also made some ginger cookies with a half lard/half butter combination last week: 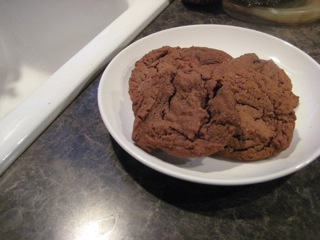 They too were delicious.

I was really nervous about using lard in baked goods because when you open up the container it smells like, well, it smells like what your kitchen smells like about 4 hours after frying bacon.  Not so appetizing.  Furthermore, we tried frying with it a few times —  once for popcorn and once for fish — and it really  made the kitchen smell icky.  I have to say, though, that both the popcorn and the fish tasted really good, with no hint of bacon flavor.  Strange, yes?

Adam was reading his Ratio cookbook and Ruhlman recommends using lard only in highly-spiced baked goods — apparently that bacony flavor can come through if you make, say, simple short-bread cookies with lard.  That makes sense to me.

But what about the health implications of all this?  Well, it never would have occurred to me to seek out lard until I read about it in Nourishing Traditions last year.  You will not be surprised to learn that Fallon and the Weston A. Price Foundation recommend using lard in cooking, as well as duck fat, chicken fat, and beef tallow.  But what about the saturated fat?  Well, let’s talk about that for a minute.

First, let’s look at this simple breakdown of Crisco shortening, Spectrum Organic Shortening (which we have been using in pie crusts), and lard.  Behold, the first-ever New Home Economics TABLE:

Now, keep in mind: the amounts for the lard can vary depending on the pig’s diet. I got these amounts from Nourishing Traditions, which most likely assumes that you’re getting lard from pastured/grass-fed/free-range (whatever) pigs. I bought mine from the co-op, and it comes from Grass Run Farm in Iowa.

Why the difference in saturated fat between the Crisco and the Spectrum?  Spectrum bases their shortening on palm oil, which is a highly-saturated tropical oil.  Crisco is more of the “we’re afraid to raise our saturated fat profile” line of thinking, so they rely instead on polyunsaturates.

Which leads me to my next question: what are they replacing trans-fats with, anyway? It’s not like food processors can just remove trans fat and have all their food still taste just as good.  It’s got to be replaced with something.  Searching around trying to find the answer to this led me to, among other places: a super creepy article from the “Homepage of the Food and Beverage Industry” that describes “The Four Paths to Sans Trans” — among them are replacing trans fats with interesterified fats and genetically modifying soy beans to get a soy-based oil that is friendlier to food processing.  NICE.  If the name alone doesn’t scare you, check out more info on interesterified fats.

Even if you are not a pie-making, cookie-baking fool, all of this should still concern you if you eat ANY PROCESSED FOOD AT ALL.

So yeah, you might say that I am now a lard convert.  Never thought I’d hear myself say that.  And it’s not like I’m going to start slathering it on everything I eat.  But in certain situations, it works really well, and it is MUCH less scary than the alternatives (although the Spectrum shortening is a bit less scary than the Crisco — that high polyunsaturate number in Crisco is a red flag to me).

To the people living in fear of saturated fat, think about this: our bodies need a little bit of saturated fat.  Many vitamins, such as E and D, are much easier for our bodies to assimilate if they accompany a bit of the good stuff.  On the other hand, our bodies most definitely do NOT need ANY amount of interesterified, trans, and whatever other highly-processed thing food processors want to tempt us with.  Did I mention that lard is high in vitamin D?  (So is butter, FYI.)

Finally, there are several sustainability aspects to this.  Palm oil, like that found in my Spectrum shortening, is a major contributor to deforestation in tropical areas.  Not to mention it has to be shipped all the way to the U.S., processed, and then shipped to me.  Lard is a byproduct, yo.  The lard I bought came from Iowa.  I could conceivably make lard myself, if I had the inclination.

So what do you think?  Are you willing to take the plunge and try it?  It took me a long time of staring at that container before I took a deep breath and used it, but now a little research both online and in the kitchen have turned me into a believer.

Update, November 6, 2010: I just found this article explaining more of the science behind interesterification, and also some other interesting information about saturated/trans/interesterified fats.  Check it out!

Update, February 24, 2011: Here’s a takedown of the new USDA nutritional guidelines, and some of the best questioning of the lipid hypothesis that I’ve seen in a long time.  A must-read!

Update, March 4, 2011: Wow, the mainstream media is really catching on. This was all over my Twitter feed today.  Civil Eats says “If you work out the numbers, you come to the surreal conclusion that you can eat lard straight from the can and conceivably reduce your risk of heart disease.”  Awesome.

11 thoughts on “Cooking with lard”

That smell when you pull fresh leeks out of the ground. Heavenly.
I killed my grass so that I could plant some…grass!?! My shipment of Pennsylvania sedge arrived today and since we are near or at the end of the time when it’s advisable to plant new grasses and have them survive the winter, I got right to work.
In my years-long battle with squirrels, I think I have lost more battles than I’ve won. This morning’s casualties: all but one of my Meyer lemons. I threw together a squirrel-proof fortress for the tree until I bring it inside in a couple weeks. 😠
Never enough nasturtiums