September is here.  The end is near.  A little over a week ago it started getting down into the low 50s every single night.  Fall has arrived, a bit early, and after a very cool summer.  Let’s assess the damage, and note the encroaching zucchini in nearly every picture: 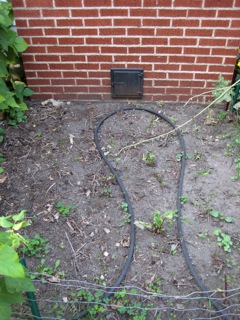 My attempt at late-season beets gets a big ole FAIL.  I’m guessing there’s just not enough light between two two-story buildings anymore at this point to get something going from seed like this.  Note to self for next year: July 4 is probably about as late as I can plant anything.  These were planted right around July 15 I think.

Brussels sprouts: are these a FAIL or not?  I can’t decide.  Do those look like sprouts to you?  They’re not very well-formed sprouts.  But they definitely like the cooler weather.

Pole beans: almost ready to harvest, yay!  I picked a couple already that were all dried up and yellow.  Look what I found inside:

This is why they’re called “Hidatsa Shield Figure” — it’s like a little bean holding a shield.  Well, sorta.

Cukes are not long for this world.

Couple more banana peppers on.  I’m hoping that I have enough to make another batch of fermented banana peppers.  They are by far the most delicious fermented thing I’ve made yet.  You can just barely see to the right, the baby kale.  Another “mid-season” attempt.  These at least got to a micro size; and we might be able to get one meal out of them.

One good thing about the fall: it’s almost parsnip time!  They are ready and waiting for a frost.

Tomatoes are also dying off.  They sure hate the cold nights.  I don’t know if we’re going to get any more, although there are still quite a few green ones on there.  Might be time for some fried green tomatoes one of these nights.

Well that’s it.  Garden is winding down for 2009 already.  I’m both relieved and sad at the same time.

One thought on “Garden update (the dead and dying edition)”

The emerald ash borer infestation in Minneapolis is getting so bad that basically all ash trees, including this one at my next door neighbor’s, are being removed. This one definitely had the bug—even I could see the damage. Sad to see so many mature trees removed though. Will it keep the borers from spreading to outstate MN? #emeraldashborer #trees #urbantrees
Exactly zero of you will be surprised that I decided to buy “just a few” seeds today @motherearthgardens. Mexican sunflower is a new one to me—I saw it at Longfellow Gardens last fall, covered in monarchs, and knew it had to be mine. #seedstarting
Was out in the yard today and this little pop of green caught my eye. Why, it’s my good friend garlic mustard returning for another season of battle. I try to eat a lot of of what I pull—it’s delicious steamed. But seriously invasive. How does it keep coming back!? #eatyourweeds #garlicmustard #foraging #invasiveplants
Made homemade English muffins for the first time. They turned out! It involves a few steps with many hours between them but all in all not too hard. Thanks for being my hand model, @adamjamespx10!