We went all the way out to the suburbs this weekend to try and find an apple-picking tool at Fleet Farm.  Being unsuccessful, Adam decided to make one himself: 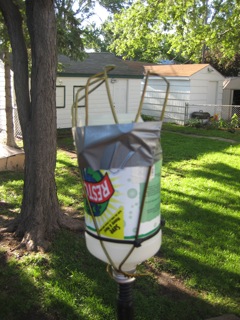 It’s simply an old dishsoap container, with a wire hanger wrapped around it and affixed with duct tape.

This is my favorite detail:

It’s attached to an old broom handle.  We’d like to get a slightly longer one eventually but this will do for now.  Adam picked a bunch of apples while I was rocking the extremely rambunctious kids tonight, and we cut a bunch of them up for freezing.  We freeze them in 5-cup portions so that we can easily throw them into a pie or crisp over the winter.  This is significantly more putsy than applesauce, but it’s good to have variety.

We also had a tree service out to give us a bid yesterday on removing our diseased/dead pine trees.  They think our apple tree has fire blight and for an extra $150 they will prune out all the diseased branches.  Apparently it’s quite an ordeal because you need to disinfect your tools between each cut to avoid spreading the blight to other areas of the tree.  Worth it?  Most definitely.

Update, 1 August 2010: Well, to be honest, this apple picker was not built to last.  It was covered with duct tape by the middle of the season last year, and completely fell apart at the end.  We were out at Fleet Farm this weekend and they had some apple pickers in stock so we picked one up for $11.

Just did some houseplant reorganizing. I have way too many now that I’ve had to squeeze in my office plants, too. Planning a little sidewalk giveaway sometime this spring if/when pandemic conditions improve. #houseplantsofinstagram #somany
First harvest of 2020! A small handful of chives from the front yard. Edible perennials are the best. #ediblelandscaping #eattherainbow #vegetablegarden #permaculture #nokomislife
Today’s quarantine bake: sourdough English muffins. I’m starting to tweak the Kitchn’s recipe and make it my own. Today I used real sourdough starter and added some whole wheat flour. These are so yummy and honestly not that hard.
Beach Buckles in the rain. #nokomislife