It occurred to me some time ago that virtue is not enough to motivate me.  For example, one of the reasons I care so much about nutrition is that I’ve been trying to lose weight for years now (with only slow and modest success).  If I could eat junk food and stay thin, I would have a much harder time motivating myself to eat healthy.

I keep applying this idea to different areas of my life, asking myself:

Bike commuting
I’ve been bike commuting for about 10 years now.  People are always saying things to me like “wow, I admire your dedication!”  But the truth is, I’ve created a situation where biking is my preferred way to get to work.  We only own one car, and Adam uses it to get to his job.  On weekday mornings, I’m faced with two choices: ride bike (free), or take the bus ($5).  I also never bothered to buy a parking spot at my job, so even on days when Adam doesn’t need the car, I know that if I drive I will have to pay $4 to park.  That adds up quickly. 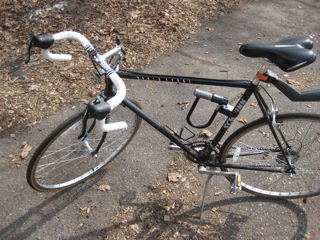 In the summertime this is a no-brainer.  I live in the city, so biking is faster than taking the bus.  Actually, this summer, because road construction is so out of control in south Minneapolis, biking is now also faster than driving.  In the winter it’s a different story.

We’ve discussed getting a second car many times.  I’ve resisted because I know that if I have my own car, and buy my own parking spot downtown, I’d have to rely solely upon my own sense of virtue to keep biking every day.  Although at this point, it has really become an ingrained habit and way of life, more than just something I’d like to do.

Other people I know have found other ways to motivate themselves to ride.  My friend Ginny, for example, has set a goal of biking 500 miles this summer.

If you bike, what are some of the things that motivate you? 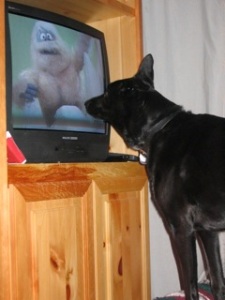 Television
When Adam and I first got married we had two televisions — one in the living room and one in our bedroom.  We watched a lot of really bad TV (so did our dog).  Eventually one of them broke down and we decided not to replace it.  But we still had one TV front and center in our living room, easily viewable from our dining room.

I don’t think I realized how much time TV was eating up until we moved into our second (current) home.  We decided early on that the TV would be in the basement.  I hoped that by creating a situation where I had to make more of an effort to watch it, I could help myself cut back a little bit.  No longer was it convenient to watch during meals, or at bedtime.  Also, our basement is freezing cold in the winter.

It worked like a charm.  I was able to cut way back.  Add in two kids, two blogs, and a really crappy digital signal converter, and I am now watching it only once or twice a week.  I don’t feel deprived at all.  We’ve never had cable, but we still see HBO shows and movies on Netflix.  It’s enough to make me feel still somewhat in touch, but it frees up a lot more of my time for making things.  (Like tonight, I made pickles!)

I’d really like to apply this concept to a lot of other areas in my life, such as a rule that I will only allow myself to eat a dessert that I’ve made from scratch.

Then again, there are also several “convenience” items without which we’d never be able to cook and eat the way we do, including our Kitchenaid mixer, our food processor, and our bread machine (although Adam has recently become disenchanted with the bread machine).

What do you think of this concept of helping yourself change by making the healthy choice the most convenient?  Can it really work for ideas beyong the couple I’ve mentioned here?

Pinks and purples are giving way to yellows and oranges. August is here. 🧡💛 #northerngardener #nokomislife #wildflowers #pollinatorgarden
Today marks Lughnasadh on the Celtic wheel of the year—halfway between solstice and the autumn equinox, the beginning of harvest season. I like observing these dates because they really revolve around the changing seasons, and growing food, and I guess they just speak to my soul. Celebrating by —obviously— eating some fresh food from the garden. #wicca #witchyvibes #harvest #harvesttime #growyourownfood #nokomislife #mplslove #northerngardener
Have you been to Wood Lake Nature Center in Richfield lately? It’s pure magic right now—and the clean water there is supporting multitudes of wildlife.
It’s bees on the anise hyssop season. 💜 Guest appearance by Buckles at the end (still finishing off the gooseberries). #nokomislife #pollinators #nativeplants